The Duality Cross is a 2-sided crucifix showing both the Crucified and Risen Christ. Motto: No Matter How Bad It Gets, There Is Reason To Hope. Created for those in crisis or depression (or those dealing with people in crisis or depression such as counselors, pastors, medical personnel), the Duality Cross is also of help to anyone having a bad day or tough time. A visual reminder that the total agony of the Crucifixion was replaced by the glory of the Resurrection, the Duality Cross inspires hope and thus a belief in a better future.

The Duality Cross design is that of a two-sided crucifix with the crucified Christ on one side and the Risen Christ on the other. The design is or will be used in a number of different products for our line.

In particular, we have a 6" statue with the figures and cross made of metal and placed on top of a wooden base. On the base is inscribed: NO MATTER HOW BAD IT GETS (Crucified side), THERE IS REASON TO HOPE (Risen side).

An important feature of the design is that you can’t see the Risen Christ when looking straight at the Crucified Christ, just as people in despair can’t see another side to life and don’t believe that their situations can get better.

The Duality Cross has multiple messages.
†For people suffering from depression, it is a visual reminder that the total agony of the Crucifixion was replaced by the joy of the Resurrection. The Christian message promises that life can turn around, just as the statue turns around to the side of hope and glory.
†The Duality Cross also symbolizes good and evil. The crucifixion of Jesus was the result of sin and evil; the resurrection was the result of God’s promise of eternal life to those who believe that good can triumph over evil. When viewed from the side, the Duality Cross shows this victory and the historical transition of the meaning of the cross from being a symbol of hate, humiliation, suffering, and death to a symbol of love, life, redemption, and hope.
† Further, the Duality Cross illustrates that one shouldn’t despair over one’s difficulties but see them as preparation for a positive change; as the darkest hour just before dawn. Just as the crucifixion preceded the resurrection, God can use the suffering, difficulties, or challenges in our lives to bring about good.
†In addition, the Duality Cross serves as a reminder of the dual nature of Christ as both human and divine.

The key selling benefits of the Duality Cross are its uniqueness and its message.

The Duality Cross solves a problem in that the standard crucifix shows only one side of the Christian message: Redemption. The whole point of Christianity is that Christ was both human and divine and that He came not only to die for our sins but to promise us eternal life: Resurrection. To focus on the suffering and death of Christ is to forget the all-important next step and the purpose of the story: Christ died, but then He rose again. Therein lies the source of Christian hope: through Christ we are redeemed and have the promise of a better life, a perfect life, in Heaven.

The Duality Cross targets a customer base that is not necessarily targeted by the standard crucifix suppliers: those who need an emphasis on the hope and promise of Christianity, a visual reinforcement of faith that will help to conquer despair and that will demonstrate that a better tomorrow can happen. The Duality Cross is perfect for people suffering a crisis or depression, or anyone who needs to be uplifted from tough times or a really bad day.

In fact, the response to the Duality Cross to date has included remarks about its profound message or emotional reactions with people saying, "You don't know how much I needed this."

In a Christian counselor’s office, there might be a cross/crucifix on the wall, but the Duality Cross statue could be placed on the desk or coffee table and be used as a teaching tool or a means of comfort. Thus it is more desirable a display than a standard cross. The same is true for anyone who deals with people who are in crisis or depression such as pastors, therapists, medical and shelter personnel, funeral directors, and the like.

Of course, the Duality Cross may be the crucifix of choice of many people simply because it tells the more complete story of the Redemption and Resurrection and will serve as a symbol of hope for them. 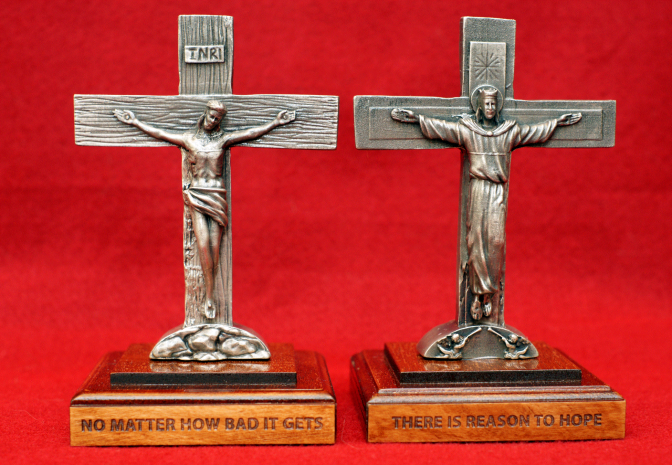